50 Years War: Israel and the Arabs 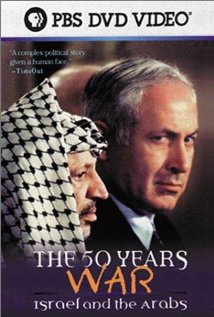 (5 hours) PBS home video documents the bitter 50-year war between the Israelis and Arabs. This program begins with the 1947 decision of the U.N. to partition Palestine. In 1948 and 1967, Arab armies were defeated as Israel struggled for statehood. The film follows the development of the Palestinian Liberation Organization. The final episode features the 1973 Yom Kipper War, the 1978 Camp David Peace Accord, the 1987 Palestinian uprising, the 1993 Oslo Agreement, and continuing attempts to solidify this unstable relationship. Featured in this documentary are Benjamin Netanyahu, Shimon Peres, and Yitzhak Shamir of Israel; King Hussein of Jordan; Yasir Arafat from the Palestine Authority; Hafez al-Assad of Syria; Jafaar Numeiry of Sudan; and American Presidents Bill Clinton, George Bush, and Jimmy Carter. The 50 Years War: Israel and the Arabs follows a half-century of war, struggles, and negotiations.