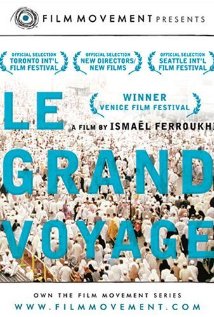 (108 minutes) Out of filial duty and a sense of adventure, Reda, a young French man, agrees to accompany his elderly Moroccan father on the hajj -- the pilgrimage to Mecca. It is an obligatory trip for every good Muslim who can afford it. The only catch: the journey from France to Saudi Arabia will be by car. Initially, Reda doesn't understand why his father doesn't simply take a plane and be done with it. His father responds that the pilgrimage should be as arduous a journey as possible to show the believer's faith. And, so it proves to be. Along the way the father and son will cross national borders, seas, even continents, but no distance is greater than the one they cross to come to terms with each other.