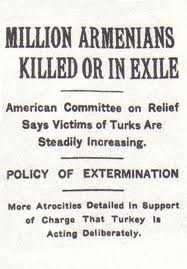 (56 mins) During World War I, the Ottoman Empire exterminated more than one million members of its minority Armenian population. This program, narrated by Julianna Margulies, unflinchingly addresses the Armenian genocide, a dark and long-suppressed chapter in 20th-century history. Rarely seen footage, uncensored photographs, excerpts from eyewitness reports and newspaper articles, and interviews with leading experts, relatives of survivors and perpetrators, and others provide viewers with a vivid image of the methodical elimination of Armenians that haunts Turkey to this day. Turkey’s ongoing denial of the genocide, calling it instead an Armenian insurrection or a Turkish civil war between Muslims and Christians, is also explored—a hot-button issue as the country positions itself for entry into the European Union. Bonus material (DVD only) includes additional interviews and film clips. Some images may be objectionable.