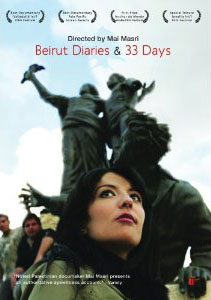 (80 mins) Young, opinionated and driven, Nadine Zaidan is a 25-year-old Lebanese activist who was one of the thousands who gathered in Beirut's Martyrs' Square in the chaotic days after the assassination of Prime Minister Rafiq Hariri in February of 2005. Filmmaker Mai Masri's camera follows Zaidan as she witnesses the political ferment embodied in the March 11th Movement, also known as The Cedar Revolution. In the massive crowd we meet people of all ages, factions and religious affiliations who share a hope for a postive new direction for Lebanon as they passionately debate such issues as Syria's influence in Lebanese politics, the investigation into Hariri's assassination and the possibility of holding free parliamentary elections.

(70 mins) In July of 2006, Israel launched a massive, 33-day attack against Lebanon after Hezbollah captured two Israeli soldiers and demanded the release of Lebanese prisoners. Award-winning director Mai Masri chroincles the efforts of the people of Lebanon - a theatre director, a graphic designer, a journalist, the director of the New TV news desk - as they labor to provide emergency aid, report up-to-date news and help Lebanese children process the violence and destruction that surround them on a daily basis. The work of a skilled and seasoned documentarian, 33 Days highlights the compassion and humanity that surface during the crisis while vividly showing the horrible devastation of war.