Until Eternity: Life and Works of Sinan the Architect 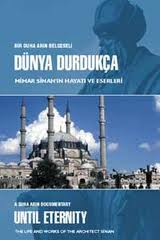 (180 mins) This six-part series is a profound documentary about the life and works of Sinan, the chief architect under four Ottoman sultans beginning in 1538 with the Suleyman the Magnificent and continuing to 1588. 30-minute sections include (I) The Stone Masons of Agirnas, (II) Sinan's early life, (III) the Sehzade complex, the first of Sina's monumental works, (IV) Sinan at his peak including the Mevlana complex, and the Selimiye mosque, (V) Sinan's hydrological projects, and (VI) a summary of Sinan's work and the world of the 16th century.