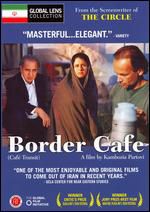 (105 mins) An independently minded Iranian widow and mother flouts tradition by reopening her late husband's Europe/Asia border café in this socially oriented drama from director Kambozia Partovi. In the wake of her husband's death, Reyhan (Fereshteh Sadre Orafaei) longs to reopen her late spouse's café despite rigid social standards that explicitly discourage her from doing so. Isolated from her friends and neighbors for her headstrong efforts to get the business back on its feet, Reyhan also faces pressure from her conservative brother-in-law, Nasser (Parviz Parastoei) -- who longs to take Reyhan as his second wife, as permitted by custom. Despite Nasser's vengeful efforts to break Reyhan's spirit and put her out of business, Reyhan's culinary skills soon begin drawing a healthy clientele that includes kindly Greek trucker Zakariyo (Nikolas Padapopoulos), whose relationship with the determined restaurateur may provide an exit from her current crisis.

In Farsi, Greek, and Turkish with English subtitles.