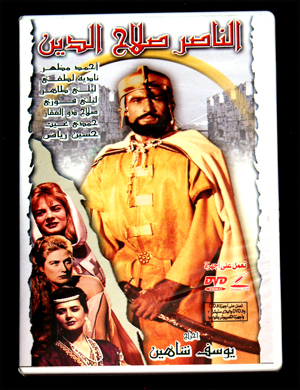 (145 mins) Aka: Saladin. An epic, three-hour film in CinemaScope named after the 12th Century Sultan who, as the film begins, is preparing to liberate Jerusalem from its Christian Crusader occupiers. It was scripted by Naguib Mahfouz and the poet and progressive writer, Abderrahman Cherkaoui, and a parallel between Saladin and President Nasser is easily drawn. Saladin is shown as an educated and peaceable man - at one point he is asked to give clandestine medical help to Richard (the Lion Heart), shot by an arrow, and later he tells him: "Religion is God's and the Earth is for all ... I guarantee to all Christians in Jerusalem the same rights as are enjoyed by Muslims."

Available in Arabic with English subtitles OR in Arabic alone.