Letter, The: An American Town and “The Somali Invasion” 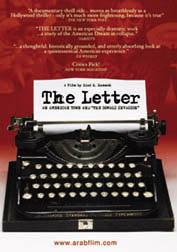 (76 mins) A firestorm of controversy erupts when Lewiston, Maine Mayor Larry Raymond sends an open letter to the 1,100 newly-arrived Somali refugees. He informs them that the city’s resources are strained to the limit and asks them to tell other Somalis not to move to the city, a move interpreted as racism by some and a rallying cry by white supremacist groups across the nation. Documenting the ensuing cross-current of emotions and events, and culminating in an anti-immigrant rally convened by The World Church of the Creator and a counter demonstration involving nearly 4,000 Lewiston residents supporting ethnic and cultural diversity, Hamzeh explores what American news outlets have dubbed the “Somali invasion” of an insulated, predominately white former mill town struggling to maintain its equilibrium in the wake of the 9/11 tragedy.