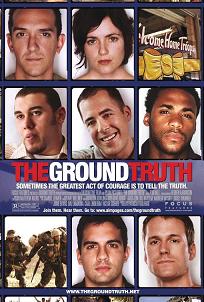 (78 mins) The Ground Truth is a searing documentary featuring the  patriotic young Americans - ordinary men and women -  who heeded the call for military service in Iraq. Hailed as "powerful" and "quietly unflinching," The Ground Truth stunned filmgoers at the 2006 Sundance and Nantucket Film Festivals. The terrible conflict in Iraq, depicted with ferocious honesty in the film, is a prelude for the even more challenging battles fought by the soldiers returning home - with personal demons, an uncomprehending public, and an indifferent government. As these battles take shape, each soldier becomes a new kind of hero, bearing witness and giving support to other veterans, and learning to fearlessly wield the most powerful weapon of all - the truth.