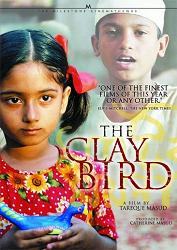 (98 mins) Set against the backdrop of the turbulent period in the late 1960s leading up to Bangladesh's independence from Pakistan, The Clay Bird tells the story of a family torn apart by religion and war. Anu, a shy young boy from rural East Pakistan (Bangladesh, as it is now known) is sent away by his father Kazi, an orthodox Muslim, to a Madrasah - or Islamic- school. Far from his family and the warmth of his region's Hindu festivities, Anu struggles to adapt to the school's harsh monastic life. As the political divisions in the country intensify, an increasing split develops between moderate and extremist forces within the Madrasah. Back in the village, these same tensions create a growing divide between the stubborn but confused Kazi and his increasingly independent wife, Ayesha. Touching upon themes of religious tolerance, cultural diversity, and the complexity of Islam, The Clay Bird has universal relevance in a crisis-ridden world.

In Bengali with English subtitles.