Does the Middle East Still Matter? An Evening with Tor Wennesland 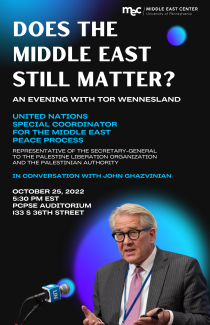 Ukraine. Covid-19. Racial justice. The erosion of democratic systems. Taiwan. Inflation…. The list of urgent issues that has grabbed international headlines in recent years is long and jarring. But conspicuously absent from the consciousness of most Americans recently has been the Middle East. For the first time in more than two decades, we find that such issues as the Arab-Israeli conflict, the Syrian civil war, the Iranian nuclear program, the "Global War on Terror” and US interventions in Iraq and Afghanistan have receded into the background of most discussions of current events.

Our guest — Tor Wennesland, United Nations Special Coordinator for the Middle East Peace Process — is perhaps better placed to answer this question that almost anyone else. A veteran Norwegian diplomat who joined his country’s Ministry of Foreign Affairs in 1983, Wennesland has been involved in the Oslo peace process between Israel and the Palestinians since the very beginning. In 1994, he served as Adviser on the Middle East desk during the process that led to the Oslo II agreement. He also served as Norway’s Representative to the Palestinian Authority from 2007 to 2011, and as Norwegian ambassador to Egypt and Libya from 2012 to 2015. He was the Aid Coordination Adviser to the Office of the Quartet — the multilateral group of negotiators comprising the UN, United States, European Union and Russia, established in 2002 to advance a two-state solution — from 2007 to 2008 and was previously involved in the work to establish transboundary water agreements for the Euphrates River and the Jordan River Basin. In December 2020, Wennesland was appointed by UN Secretary-General Antonio Guterres as UN Special Coordinator for the Middle East Peace Process, as well as SG's Special Envoy to the Quartet and his Personal Representative to the Palestine Liberation Organization. He has been expressly sent to the Penn campus at the request of the Secretary-General to address this important issue.

Mr Wennesland will be in conversation with John Ghazvinian, Executive Director of the Middle East Center, for a wide-ranging discussion of contemporary events and challenges in the Middle East.