The Outlaw Ocean Project: The Migration Crisis Off the Coast of Libya 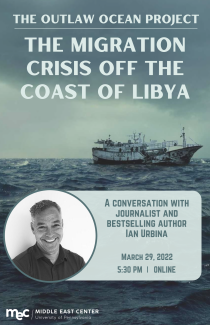 Ian Urbina will be discussing the current migration crisis in Libya, based largely off of his recent investigation in The New Yorker. The E.U., led by Italy, has trained and equipped the Libyan Coast Guard to serve as a proxy maritime force, whose central purpose is to stop migrants from reaching European shores. Efficient and brutal, the at-sea capture and on land internment of these migrants is what European Union officials hail as part of a successful partnership with Libya in their “humanitarian rescue” efforts across the Mediterranean. But the true intent of this joint campaign, according to many human rights advocates, legal experts and members of the European Parliament, is less to save migrants from drowning than to stop them from reaching European shores. Once captured by the Libyan Coast Guard, tens of thousands of these migrants are then delivered into a dozen or so detention centers run by militias. The E.U. has also denied directly funding the gulag of migrant prisons in Libya, while consistently both conceding their barbarity and calling for improvements. But it has resisted calls to date to end its work with Libya and take steps to rescue those caught up in the country’s migrant jails.

Ian Urbina is the director of The Outlaw Ocean Project, a non-profit journalism organization based in Washington D.C. that produces investigative stories about human rights, environment and labor concerns on the two thirds of the planet covered by water. Before founding The Outlaw Ocean Project, Urbina spent roughly 17 years as a staff reporter for The New York Times. He has received various journalism awards, including a Pulitzer Prize, a George Polk Award and an Emmy nomination. Several of his investigations have also been converted into major motion pictures.