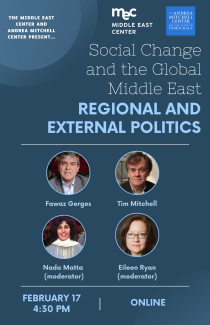 The history of the Middle East and North Africa has long been shaped by regional and global politics. Sitting at the crossroads of trade and migration, it has been a site of imperial conflict, a cradle of world religions, a major source of the twentieth century’s most valuable commodity, and a focus of Great Power foreign policy. In considering the impact of the current constellation of regional and foreign relations on the Middle East’s internal development, Fawaz Gerges and Tim Mitchell will grapple with a wide range of questions. What are the most salient geostrategic rivalries now at play? How does international pressure influence movement toward (or away from) democracy and women’s employment and rights, among other forms of social change? How do capitalism and imperialism continue to shape the region’s infrastructure, economic development, and public policies? What is the role of religion in public policy and regional politics in the MENA, and how has it changed over the years?

Fawaz Gerges is Professor of International Relations at the London School of Economics and Political Science (LSE), and holder of the Emirates Professorship in Contemporary Middle East Studies. He was also the inaugural Director of the LSE Middle East Centre from 2010 until 2013 He earned a doctorate from Oxford University and M.Sc. from the London School of Economics. Gerges has taught at Oxford, Harvard, and Columbia, and was a research scholar at Princeton and the chairholder of the Christian A. Johnson Chair in Middle Eastern Studies and International Affairs at Sarah Lawrence College, New York. Gerges’ most recent books are Making the Arab World: Nasser, Qutb, and the Clash that Shaped the Middle East (Princeton University Press, 2018), ISIS: A History (Princeton University Press, 2016) and The New Middle East: Protest and Revolution in the Arab World (Cambridge University Press, November 2013).

Timothy Mitchell is the William B Ransford Professor of Middle Eastern, South Asian and Africa Studies at Columbia University. His areas of research include the place of colonialism in the making of modernity, the material and technical politics of the Middle East, and the role of economics and other forms of expert knowledge in the government of collective life. Much of his current work is concerned with ways of thinking about politics that allow material and technical things more weight than they are given in conventional political theory. At Columbia he teaches courses on the history and politics of the Middle East, colonialism, and the politics of technical things. Mitchell is the author of Colonising Egypt (1991), a study of the emergence of modern modes of government in the colonial period and an exploration of the forms of reason, power and knowledge that define the experience of modernity, as well as Carbon Democracy: Political Power in the Age of Oil, (Verso, 2011); and Rule of Experts: Egypt, Techno-Politics, Modernity (University of California Press, 2002.)

Nada Matta is an Assistant Professor of Sociology in the Departments of Global Studies and Sociology at Drexel University. Her work investigates questions of structural inequality and social change in the Middle East, with particular focus on gender and labor movements. Her research adopts a comparative-historical approach and examines interactions between state policies and social movements at a cross-national level.  She is currently working on a book manuscript tilted ‘Class Forces in the Egyptian Uprising of 2011.’ She has published articles in the European Journal of Sociology and Politics and Society. She holds a PhD from New York University, an MA from Goldsmiths, University of London, and a BA from Tel Aviv University.

Eileen Ryan earned a BA from UNC-Chapel Hill and an MA from the University of Chicago in Religious Studies before moving into a history PhD program at Columbia University. Her first book, Religion as Resistance: Negotiating Authority in Italian Libya (Oxford, 2018), used skills from both disciplines to investigate how Catholic interests infused Italian colonialism in Muslim North Africa. This book is not only a history of Italian imperialism, however. It also provides a new interpretation of the political interests of Muslim elites in Libya who negotiated authority with Italian officials. Ryan's new book project, Black Italy, looks at the history of blackness as a racial category and lived experience in Italy since unification in the mid-19th century. This book amplifies the experiences of people from the African diaspora at various points in Italian history. But it also traces the historical trajectory of Italian concepts of racial hierarchies.  This project places Italy in a liminal relationship to Europe, asking questions about race and the making of national identities in the process.