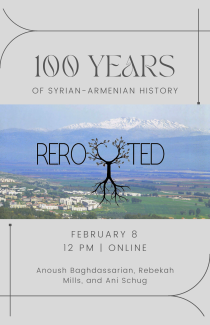 For those unable to attend, CLICK HERE FOR EVENT RECORDING

Armenians have formed a part of Syrian society for centuries as their own ethnic, linguistic and religious community. Then, in the aftermath of the 1915 Armenian Genocide, hundreds of thousands of survivors and orphans fled to Syria seeking refuge and safety. Once in Syria, they put down roots and preserved their cultural identity by creating schools, churches, and cultural societies. Syrian-Armenian organizations and transnational Armenian organizations created a thriving community, one of the strongest in the whole Armenian Diaspora. The Syrian Civil War completed disrupted this community through violence, displacement over half of the community, and destruction of key cultural heritage sites.

Ani Schug is one of the founders of the Rerooted Archive which preserves over 200 testimonies of Syrian-Armenians affected by the Syrian Civil War. Her undergraduate degree is from Pomona College in Politics and Middle Eastern Studies. She also studied and speaks Armenian, Arabic, Spanish and Swahili. Ani currently works in immigrant and refugee legal services in Philadelphia, representing clients in green card, naturalization, and family reunification applications.

Anoush Baghdassarian is a JD Candidate at Harvard Law School. She has a Master’s in Human Rights Studies from Columbia University, and a Bachelor’s in Psychology and Genocide Studies from Claremont McKenna College. She has a career focus on transitional justice and international criminal law and some of her work experiences include interning as an advisor to the Armenian Permanent Mission to the UN, and working for the UN Office for the High Commissioner for Human Rights.

Rebekah Mills is a second-year law student at Charles Widger School of Law, Villanova University. In addition to her history and political science degree from Barnard College, Columbia University, she has her Master of International Affairs from SIPA, Columbia University. Throughout her studies, Rebekah has presented on the importance of cultural heritage preservation, connecting history to archeology, and archeological conservation methods at conferences and public talks around the world. She is a legal fellow with the Rerooted Archive, having written two reports Syrian-Armenian cultural heritage destruction. Further, she writes articles for the Girl Museum on historical sites connected to girlhood and was selected to be a part of the 2020 ARCUS Fellowship in Cultural Heritage and Historic Preservation. Focusing her studies on cultural heritage law, Rebekah is excited to share her latest research on Syrian-Armenian cultural heritage destruction and rebuilding.