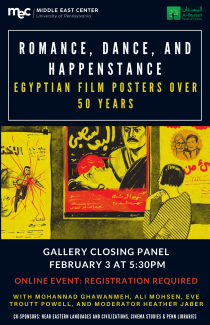 The Middle East Center and Al-Bustan Seeds of Culture are proud to have presented a season of programming dedicated to the art and pageantry of 20th century Egyptian cinema. Join us as we conclude this exciting exhibition with a panel conversation bringing together Al-Bustan's Executive Director, Mohannad Ghawanmeh, Professor Eve Troutt-Powell, and the Institute of Contemporary Art's Ali Mohsen. Conversation moderated by Annenberg PhD candidate Heather Jaber.

Mohannad Ghawanmeh is a scholar, cineaste, educator, and teacher of communication and media. His instruction has centered on the cinema, for which he has also written, produced, acted, consulted, programmed, and curated. He is co-founder of the Twin Cities Arab Film Festival and curated the first editions of the Arab American National Museum’s film festival. He earned his PhD from UCLA in Cinema and Media Studies in 2020 with a focus on the intersection of governmentality, migration, nativity, religion, theater, music, literature, industrialization, and modernity typically in the mold of cultural history. Born to Palestinian refugees and an immigrant to the United States, Mohannad has also lived in Egypt, Japan, Jordan, and Saudi Arabia.

Eve M. Troutt Powell is the Christopher H. Browne Distinguished Professor of History and Africana Studies who teaches the history of the modern Middle East. As a cultural historian, she emphasizes the exploration of literature and film in her courses. She is the author of Tell This in my Memory: Stories of Enslavement from Egypt, Sudan and the Ottoman Empire (Stanford University Press, 2012), A Different Shade of Colonialism: Egypt, Great Britain and the Mastery of the Sudan (University of California, 2003) and the co-author, with John Hunwick, of The African Diaspora in the Mediterranean Lands of Islam, (Princeton Series on the Middle East, Markus Wiener Press, 2002). Troutt Powell received her B.A, M.A and PhD from Harvard University. She has received fellowships from the American Research Center in Egypt and the Social Science Research Council, and has been a fellow at the Institute for Advanced Study in Princeton and at the Radcliffe Institute for Advanced Study.

Ali Mohsen is the Digital Content Editor at the Institute of Contemporary Art. Besides covering politics and culture for numerous international publications during his time as a journalist in Egypt, Ali also managed a documentary production company with offices based in Cairo and Beirut. His paintings, drawings, videos, and installations have been featured in numerous solo and group exhibitions across the Middle East, Europe, and North America, and his articles and essays have been republished by Harper’s, CNN, Al-Arabiya, and in various compilations.

Heather Jaber received her M.A. in media studies from the American University of Beirut (AUB). As a doctoral candidate, she analyzes digital practices of exposure in the Arab world, focusing on the role of emotions and affects in the study of geopolitics and popular culture. She is interested in the way that spectators are pulled into transnational spectacles which channel, amplify, and transform public feeling. She has published work in Critical Studies in Media Communication, The International Journal of Communication (IJoC), and Kohl: A Journal for Body and Gender Research. She has also worked in the journalism and editorial fields in Lebanon, the US, and Austria, writing for newspapers and seminar programs.