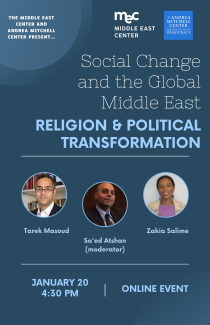 The rise of Islamization has had enormous impacts on the political and social landscapes of Egypt, Morocco, and the broader Middle East and North Africa (MENA) region. Tarek Masoud and Zakia Salime will address the complexity of these impacts across a varied region.How are Islamic and Islamist social movements and political parties positioning themselves within their national contexts? How do the various movements relate to each other across the MENA region? What are their prospects for bolstering- or undermining-pluralism in terms of gender equality, political diversity, and religious tolerance?

Tarek Masoud is Professor of Public Policy at Harvard University's John F. Kennedy School of Government. He is the Faculty Director of the Middle East Initiative, and of the Initiative on Democracy in Hard Places. His research focuses on political development in Arabic-speaking and Muslim-majority countries. He is the author of Counting Islam: Religion, Class, and Elections in Egypt (Cambridge University Press, 2014), of The Arab Spring: Pathways of Repression and Reform with Jason Brownlee and Andrew Reynolds (Oxford University Press, 2015), as well as of several articles and book chapters. He is a 2009 Carnegie Scholar, a trustee of the American University in Cairo, a member of the editorial board of the Journal of Democracy, and the recipient of grants from the National Science Foundation and the Paul and Daisy Soros foundation, among others. He holds an AB from Brown and a Ph.D from Yale, both in political science.

Zakia Salime teaches courses in feminist theory, gender, globalization, contemporary social theory, social movements, postcolonial theory. Salime’s book: Between Feminism and Islam: Human Rights and Sharia Law in Morocco (Minnesota, 2011) illustrates this interplay of global regimes of rights and local discourses by exploring the spaces of encounters of liberal feminism and Islamism in Morocco.  Her co-edited volume Freedom Without Permission: Bodies and Spaces in the Arab Revolutions (Duke, 2016) explores how bodies, subjectivities and memories were constituted and constitutive of sexed and gendered spaces during the North African and Middle Easter Uprisings of 2011. Salime’s current book manuscript explores global extractive modes of governance through the study of land-and-resource-grab in Morocco. Salime's publications encompass a wide range of interests including urban youth protests and music, Islamophobia, war and racial politics in the U.S.

Sa'ed Atshan is an Associate Professor of Anthropology at Emory University, He previously served as Associate Professor of Peace and Conflict Studies at Swarthmore College. As an anthropologist and peace and conflict studies scholar, Atshan's research is focused on a) contemporary Palestinian society and politics, b) global LGBTQ social movements, and c) Quaker Studies and Christian minorities in the Middle East. He is the author of Queer Palestine and Empire of Critique (Stanford University Press, 2020) and The Moral Triangle: Germans, Israelis, Palestinians (Duke University Press, 2020). His forthcoming book, Paradoxes of Humanitarianism: The Social Life of Aid in the Palestinian Territories , is under contract with Stanford University Press in their Anthropology of Policy Series. Atshan examines the politics of international aid provision in the West Bank and Gaza Strip.