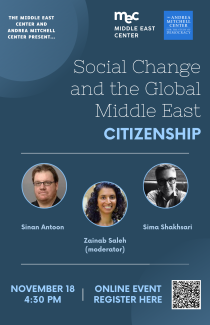 Throughout the 20th and 21st centuries, debates on citizenship and belonging in Iran and Iraq have shaped government practices and popular struggles alike. They have become embedded in national discourses and practices of state formation, imperial interventions and geopolitical calculations, and popular mobilizations to (re)configure belonging and boundaries. The disparities between ideologies of citizenship and their daily operations are tied to the construction of racial, ethnic, class, political, and religious differences within the state and civil society. Sima Shakhsari and Sinan Antoon address the ways citizenship have been articulated, rearticulated, and disarticulated in nexuses of power and empire, mobility and diaspora, political activism, class and gender, and media technologies.

Sinan Antoon is an associate professor at New York University. He completed his PhD in Arabic and Islamic Studies at Harvard University in 2006. Antoon’s research interests include pre-modern and modern Arabic literature and contemporary Arab culture and politics. His works have appeared in major publications, such as Aljazeera.net, The New York Times, The Nation, Middle East Report, Journal of Palestine Studies, Journal of Arabic Literature, The Massachusetts Review, World Literature Today, Ploughshares, and Washington Square Journal. His novel, Wahdaha Shajarat al-Rumman (Beirut, 2010), was translated into English as The Corpse Washer for Yale University Press in 2013, and the work won the 2014 Saif Ghobash Banipal Prize for translation, longlisted for the 2014 Independent Foreign Fiction Prize for best translated fiction, and won the 2017 Arab Literature Prize. Antoon is a member of the Editorial Review Board of the Arab Studies Journal and co-founder and co-editor of Jadaliyya.

Sima Shakhsari is an assistant professor in the Department of Gender, Women, and Sexuality Studies at the University of Minnesota. Shakhsari earned their PhD in Cultural and Social Anthropology at Stanford University and have held postdoctoral positions at the University of Pennsylvania’s Wolf Humanities Center and the Women’s and Gender Studies Department at the University of Houston. Their book, Politics of Rightful Killing: Civil Society, Gender, and Sexuality in Weblogistan (Duke University Press, 2020), provides an analysis of Weblogistan as a place of cybergovernmentality where national and neoliberal gendered subjectivities are produced through online and offline heteronormative disciplining and normalizing techniques. Shakhsari is the Anthropology, Sociology, and Gender Studies Book Review Editor at the International Journal of Middle East Studies, an editorial team member of Jadaliyya’s new sexuality page, and an editorial team member of Agitate! Unsettling Knowledges.

Zainab Saleh is an assistant professor of Anthropology at Haverford College. Her research focuses on subjectivity, nostalgia, belonging, war, empire, citizenship laws, and violence in Iraq and the Iraqi Diaspora. She is the author of Return to Ruin: Iraqi Narratives of Exile and Nostalgia (Stanford University Press, 2021).  Currently, she is working on a book project titled Uprooted Memories: Citizenship, Denaturalization, and Deportation in Iraq, which focuses on the deportation of Iraqi Jews, Iraqis of Iranian origin, and communists throughout the twentieth century. Her work has also appeared in American Anthropologist, Arab Studies Journal, Anthropology News, Costs of War project with Brown University, and Political and Legal Anthropology Review.

Click here for more information.
Copyright © 2021 The Trustees of the University of Pennsylvania
Report Accessibility Issues and Get Help
Penn WebLogin