The Ottoman Empire and Its Afterlives 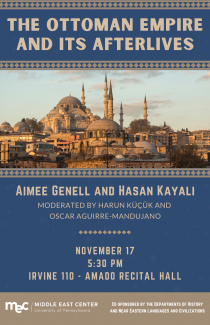 Aimee Genell is a historian of the late Ottoman Empire and its relations with Europe. Genell received her PhD from Columbia University in 2013 and held a Postdoctoral Fellowship in International Security Studies at Yale University. She is currently an assistant professor of Islamic World History at the University of West Georgia. Her upcoming monograph, Empire by Law: The Ottoman Origins of the Mandates System in the Middle East, traces the Ottoman roots of the post-imperial political order through an analysis of the inter-imperial contest over autonomous Egypt, showing that before the First World War, Ottoman autonomous provinces established a new type of non-sovereign imperial administration.

Hasan Kayalı is a Professor in History at the University of California, San Diego. Kayalı received his doctorate in History and Middle Eastern Studies at Harvard University. He has written on the administration of Arab provinces in the late Ottoman Empire and nationalism and rival ideologies during the transition from empire to nation states. Kayalı's recent book, Imperial Resilience (University of California Press 2021), discusses the Ottoman landscape of the modern Middle East's formative years, from the end of the First World War to the conclusion of the peace settlement for the empire in 1923.

Oscar Aguirre-Mandujano studies early modern Ottoman intellectual history, and its connections to literature, poetry, and bureaucracy. Aguirre-Mandujano is currently working on his book project, Poetics of Empire: Literature and Political Culture at the Early Modern Ottoman Court, which examines the relation between material culture, literary composition, and the transformation of political thought in the early modern Islamic world and Europe. Poetics of Empire shows that in the fifteenth and sixteenth centuries Ottoman scholars and statesmen produced a new literary language in order to express political thought. His research and teaching are part of a broader scholarly project to uncover the dynamics of intellectual production and communication in the early modern Islamic world.

Harun Küçük is Director of the Middle East Center and Associate Professor of History and Science Studies. He completed his doctoral work on History and Science Studies at University of California, San Diego (2012). Prior to joining Penn's Department of History and Sociology of Science, he was a lecturer at Sabancı, Şehir and Boğaziçi Universities in Istanbul. His first book, Science without Leisure: Practical Naturalism in Istanbul, 1660-1732 (Pittsburgh, 2019) is a history of vernacular science in the Ottoman Empire.