Global Jihad and Movements of Rage

Glenn Robinson, Associate Professor in Defense Analysis at the Graduate School of Operational and Information Sciences in the Naval Postgraduate School 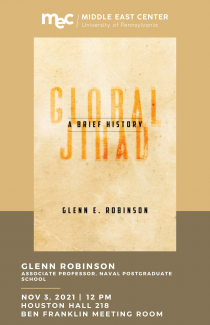 Most violent jihadi movements in the twentieth century focused on removing corrupt or repressive secular regimes throughout the Muslim world. But following the 1979 Soviet invasion of Afghanistan, a new form of jihadism emerged — global jihad — turning to the international arena as the primary locus of ideology and action. In his new book, Global Jihad: A Brief History, Glenn Robinson tells the story of four distinct jihadi waves — each with its own distinct methods and ideologies. In his lecture, Robinson will present an interpretive history of global jihad and then argue that global jihad is a variant form of a movement of rage.

Glenn Robinson is an Associate Professor in Defense Analysis at the Graduate School of Operational and Information Sciences in the Naval Postgraduate School. Robinson has authored or co-authored four books on Middle East politics, and 120 journal articles, book chapters, government reports and conference papers. Robinson's research interests include social movement theory, state-building and governance, and political violence. Previously, Robinson was the associate editor for the Middle East Studies Association Bulletin, Fulbright Scholar at the University of Jordan in Amman, Johns Hopkins SAIS Fellow at Yarmouk University in Jordan, and a research fellow for the Truman Institute of the Hebrew University of Jerusalem.