China & the Middle East: Changes and Continuity in Contemporary Policy 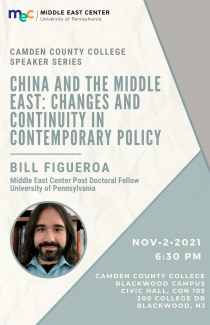 The last decade has seen a great deal of attention on the relationship between China and the Middle East. New economic and trade initiatives, a flurry of Chinese goods and construction services throughout the region, and a growing Chinese appetite for natural resources have had a significant impact on existing relationships and geopolitical calculations. Whether these changes are disruptive and exploitative, or stabilizing and mutually beneficial is a hotly debated question, but there is no denying that China is becoming a major player in the Middle East. Historian Bill Figueroa will provide a historical perspective on these debates, and on China's contemporary involvement in the Middle East.

Bill Figueroa completed his PhD in the history department at University of Pennsylvania, with a focus on global Cold War history, and in particular the relationship between Iran and China. In 2012, he broadened his focus to the modern Middle East and its interactions with China upon the beginning of his graduate career at Penn. He has studied Farsi in Dushanbe, Tajikistan as well as the UT-Austin's intensive summer language program, and Mandarin in Beijing at Peking University and Central University for Nationalities. His dissertation examined the impact of Chinese political thought on the Iranian revolution and the rise of explicitly Maoist Iranian communist organizations in the aftermath of the Sino-Soviet split.