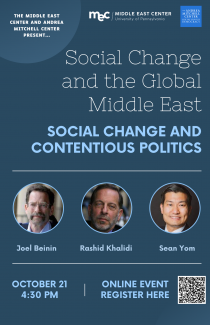 The Middle East has a longstanding reputation as a place of contention, where ethnic groups and global powers alike have struggled over land, trade routes and, more recently, valuable resources such as oil. The Arab Spring of the early 2010s added a new dimension to the region’s contentious politics, as internal tensions between rulers and populaces erupted into a series of revolts, which have since inspired similar protests around the world. A decade later, two leading thinkers on the impact of the Arab Spring, Joel Beinin and Rashid Khalidi, assess the prospects for the region  going forward. They will discuss the likelihood of democratic change, the factors that inhibit social transformation, the historical context of the current era of contentious politics, the often overlooked actors at the urban and regional peripheries, how patterns of political activism have changed over time – and the enduring relevance of these movements to popular struggles for dignity, justice, and bread the world over.

Joel Beinin is the Donald J. McLachlan Professor of History and Professor of Middle East History, Emeritus at Stanford University. He received his Ph.D. from the University of Michigan in 1982 before coming to Stanford in 1983. From 2006 to 2008 he served as Director of Middle East Studies and Professor of History at the American University in Cairo. In 2002 he served as president of the Middle East Studies Association of North America. Beinin’s research and writing focus on the social and cultural history and political economy of modern Egypt, Palestine, and Israel and on US policy in the Middle East.

Rashid Khalidi is the Edward Said Professor of Modern Arab Studies. Rashid Khalidi received his BA from Yale in 1970, and his D.Phil. from Oxford in 1974. He is editor of the Journal of Palestine Studies, and was President of the Middle East Studies Association, and an advisor to the Palestinian delegation to the Madrid and Washington Arab-Israeli peace negotiations from October 1991 until June 1993. He is the author of numerous books including more recently The Hundred Years' War on Palestine: A History of Settler Colonialism and Resistance, 1917- 2017 (2020); Brokers of Deceit: How the U.S. has Undermined Peace in the Middle East (2013); Sowing Crisis: American Dominance and the Cold War in the Middle East (2009); andThe Iron Cage: The Story of the Palestinian Struggle for Statehood (2006).

Sean Yom is Associate Professor of Political Science at Temple University and Senior Fellow in the Middle East Program at the Foreign Policy Research Institute. He is a specialist on regimes and governance in the Middle East, especially in Arab monarchies like Jordan, Kuwait, and Morocco. His research engages topics of authoritarian politics, democratic reforms, institutional stability, and economic development in these countries, as well as their implications for US foreign policy.