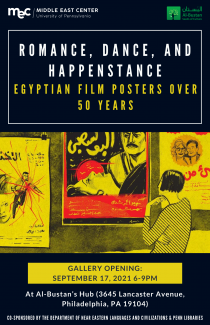 The Middle East Center and Al-Bustan Seeds of Culture are proud to present a season of programming dedicated to the art and pageantry of 20th century Egyptian cinema. Join us as we launch this exciting exhibition with a talk by Al-Bustan Executive Director, Mohannad Ghawanmeh and PhD candidate in Arabic literature, Rawad Wehbe.

Mohannad Ghawanmeh is a scholar, cineaste, educator, and teacher of communication and media. His instruction has centered on the cinema, for which he has also written, produced, acted, consulted, programmed, and curated. He is co-founder of the Twin Cities Arab Film Festival and curated the first editions of the Arab American National Museum’s film festival. He earned his PhD from UCLA in Cinema and Media Studies in 2020 with a focus on the intersection of governmentality, migration, nativity, religion, theater, music, literature, industrialization, and modernity typically in the mold of cultural history. Born to Palestinian refugees and an immigrant to the United States, Mohannad has also lived in Egypt, Japan, Jordan, and Saudi Arabia.

Rawad Wehbe is the lead cataloger of the Egyptian Film Poster Collection held by the University of Pennsylvania's Van Pelt Library. He researches Arabic poetry, poetics, and literary theory. He studies Arabic literature across traditional periodization to investigate how language in poetry hacks human emotions, feelings, and affects to create meaning. Rawad's academic interests include literary translation, teaching Arabic as a foreign language, Arabic culture, religious minorities in the Middle East, and the history of the Middle East with a special focus on the Lebanese civil war.

Co-sponsored by Penn Libraries, Cinema Studies, and the Department of Near Eastern Languages and Civilizations