Twenty Years Later: The Legacy of 9/11 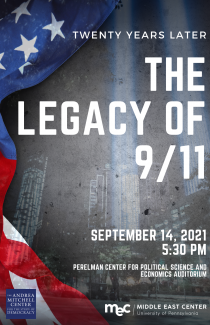 Twenty years have passed since the tragic events of September 11, 2001. Join us for this special retrospective discussion of the many ways the world has been changed, challenged, and reconfigured by the fallout from this historic moment.

Spencer Ackerman is a contributing editor and former senior national security correspondent for The Daily Beast. He is the author of REIGN OF TERROR: How The 9/11 Era Destabilized America and Produced Trump (Viking, 2021). The former U.S. national security editor for the Guardian, Ackerman was part of the Pulitzer Prize-winning team reporting on Edward Snowden's surveillance revelations.

Dr. Tesneem Alkiek earned her Ph.D. in Islamic Studies with a focus on the development of Islamic law from Georgetown University. She completed her undergraduate degree in Early Christianity and Islamic Studies at the University of Michigan. Tesneem serves as the Director of Expanded Learning at the Yaqeen Institute where she works with her team to create curricula and other resources for communities to engage with the latest research on Islam.

Col. Vincent Ciuccoli is a Marine Corps officer with extensive deployment experience in the Middle East and North Africa. From 2010 to 2012, he acted as the lead operations desk officer for Iraq and the Deputy Team Leader for NATO’s Operation Unified Protector in Libya. In 2015-2016, he studied at Israel's National Defense College, and was subsequently deployed by CENTCOM in support of Operation Inherent Resolve. Col. Ciuccoli is Commanding Officer of the Philadelphia Consortium NROTC.

Carol Kalin is a twenty-year veteran of the U.S. Foreign Service. She has served in Lebanon, Egypt, and Saudi Arabia, and was Deputy Chief of Mission at the U.S. Embassy in Beirut on September 11, 2001. She taught Critical Writing at Penn beginning in 2013.

Zubaida Qaissi is a researcher on the PBS documentary series Finding Your Roots and a 2020 Penn graduate, with a BA in Near Eastern Languages and Civilizations and Religious Studies. Her interests include documentary and practices of remembering, languages, and painting. Born in Iraq, she spent her childhood in Baghdad, Damascus, and later Philadelphia.

Hazami Sayed is founder of Al-Bustan Seeds of Culture, Philadelphia's most prominent Arab-American cultural organization. Originally from Lebanon, Sayed was trained as an architect and founded Al-Bustan in the aftermath of September 11, 2001, in an attempt to cultivate a positive image of Arab-American culture as an inspiration for her two young children.

Please note: in accordance with the University of Pennsylvania's current COVID-19 guidelines, the Middle East Center is planning to hold this event in person. It is MANDATORY for all attendees to wear masks. Physical distancing will be observed. All attendees must sign a special event sign-in sheet, attesting that they have been fully vaccinated for COVID-19 or are a Penn community member enrolled in the Penn Cares testing program. We will continue to monitor CDC, city, and university guidelines and will move this event online if it is deemed necessary for the protection and safety of our community.