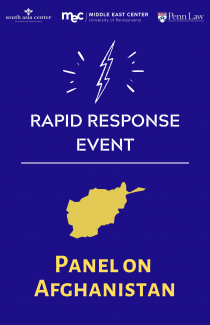 Four American presidential administrations. Two decades of war. A fundamental misreading of the geopolitical realities of Afghanistan. A humanitarian crisis as the country falls into the hands of the Taliban.

As the situation in Afghanistan continues to unfold, it is more important than ever for us to come together as a community. Join us for an important conversation.

Anila Daulatzai is a socio-cultural anthropologist and the Chancellor’s Fellow at UC Berkeley. She has taught in prisons, and in universities across three continents. She has been conducting research in Afghanistan as well as with Afghan refugees in Pakistan since 1995. Between 2006 and 2013 she carried out ethnographic fieldwork in Kabul and taught at Kabul University and at the American University of Afghanistan. Her past and current research projects look at widowhood, heroin use, and polio through the lens of serial war.  She is currently completing her book manuscript provisionally titled War and What Remains. Everyday Life in Contemporary Kabul, Afghanistan.

*Please note that because of the fast-paced and quickly unfolding nature of the topics at hand, MEC Rapid Response Events are not recorded.