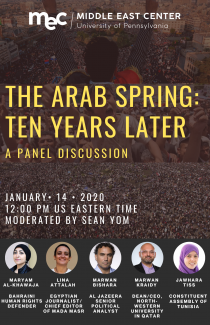 Ten years have passed since the self-immolation of Tunisia's Mohamad Bouazizi set into motion the Arab Spring. In pursuit of democratic change, citizens from all over the Arab world participated in a transformative series of protests, uprisings, and rebellions that fundamentally reshaped the region and the politics of many nations within it. In the years since, the world has witnessed civil wars, upended regimes, governmental reforms, and refugee crises in the Arab world. Though the long-term impacts are yet to be fully understood, the region has been unquestionably redefined in the years since the initial outbreak of the Arab Spring.

In commemoration of this important anniversary, the Middle East Center presents: The Arab Spring: Ten Years Later. We have assembled an incredible panel of experts who will be joining us on January 14, 2021 at 12:00 PM (U.S. Eastern Time) to discuss the events of the Arab Spring and its legacy. Our panel includes:

Maryam al-Khawaja: Bahraini human rights defender; co-director and Special Advisor on Advocacy of the Gulf Center for Human Rights; board member of the International Service for Human Rights

Lina Attalah: Egyptian journalist; co-founder and chief editor of Mada Masr; Knight International Journalism Award winner; recognized by Time as one of the 100 Most Influential People of 2020

Marwan Kraidy: Dean and CEO of Northwestern University in Qatar; author of The Naked Blogger of Cairo: Creative Insurgency in the Arab World; former Anthony Shadid Chair in Global Media, Politics, and Culture at University of Pennsylvania's Annenberg School for Communication

Jawhara Tiss: Politician, activist, and former Member of Constituent Assembly of Tunisia; co-star of A Revolution in Four Seasons (2016)