The Origins of the Kurdish Question

Sèvres, Lausanne and the Partition of Ottoman Kurdistan 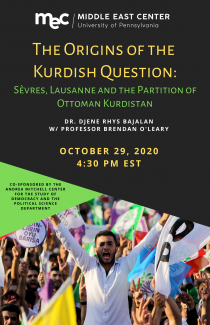 Historians of the Kurdish question have often presented the collapse of the Ottoman Empire in the aftermath of the Great War as a ‘missed opportunity’ for Kurdish nationalists to establish and independent Kurdish homeland. Indeed, the 1920 Treaty of Sèvres, signed in the summer of 1920, provided the Ottoman Kurdish community with a pathway to independence. However, just three years later, the Treaty of Lausanne, a treaty that provided no provision on Kurdish statehood, superseded Sèvres leaving the Kurds ‘stateless’. Consequently, the question of why the Kurds failed to acquire a nation-state, at a time when the Middle East was being remade along ‘national’ lines, has both haunted Kurdish nationalists and animated scholarly discussion. This talk will examine the existing historiographical debate pertaining to this issue and call into question some of the underlying assumptions that have framed the debate over the last century.

Dr. Djene Rhys Bajalan is an assistant professor in the Department of History at Missouri State University. He holds a DPhil in Oriental Studies from the University of Oxford and has both studied and taught in Great Britain, Turkey, and Iraqi Kurdistan. His research focuses on the Ottoman Kurdish community and the emergence of Kurdish political activism in the late nineteenth and early twentieth century. He is the author of Jön Kürtler: Birinci Dünya Savaşı'ndan Önce Kürt Hareketi 1898-1914 (2010), co-editor of Studies in Kurdish History: Empire, Ethnicity and Identity (2015) as well as the author of a number of scholarly articles. He also serves on the editorial board of the journal Kurdish Studies and has contributed to publications including Open Democracy, Jadaliyya, Ahval, and Jacobin.

Professor Brendan O'Leary is the Lauder Professor of Political Science at the University of Pennsylvania. He is the author, co-author, and co-editor of twenty eight books and collections, and the author or co-author of hundreds of articles or chapters in peer-reviewed journals, university presses, encyclopedia articles, and other forms of publication, including op-eds. His latest production is a three-volume study called A Treatise on Northern Ireland,  published  by Oxford University Press, which has been positively reviewed in the Dublin Review of Books, the Irish News, and the Irish Times. In April 2020 it received the James S. Donnelly Sr. best book prize in History and Social Science of the American Conference on Irish Studies. Since 2003 O’Leary has regularly been an international constitutional advisor to the Kurdistan Regional Government in Iraq, assisting in the negotiation of the Transitional Administrative Law (2004); electoral systems design (2004-5); the Constitution of Iraq (2005); the draft Constitution of the Kurdistan Region (2005-); and in monitoring violations of the Constitution of Iraq by its federal government. He has  been an expert witness on Iraq and Kurdistan to branches of the US Government, and to the United Kingdom's Iraq Commission.