A History of Kirkuk 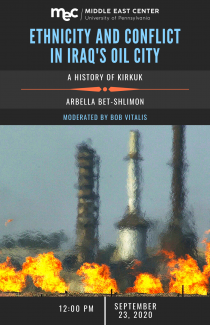 Kirkuk is Iraq’s most multilingual city, for millennia home to a diverse population. It was also where, in 1927, a foreign company first struck oil in Iraq. Kirkuk soon became the heart of Iraq’s booming petroleum industry. Over the decades that followed, oil, urbanization, and colonialism shaped the identities of Kirkuk’s citizens, forming the foundation of an ethnic conflict.  In the early 1920s, when the Iraqi state was formed under British administration, group identities in Kirkuk were fluid. But as the oil industry fostered colonial power and Baghdad’s influence over Kirkuk, intercommunal violence and competing claims to the city’s history took hold. The ethnicities of Kurds, Turkmens, and Arabs in Kirkuk were formed throughout a century of urban development, interactions between communities, and political mobilization. Ultimately, this lecture argues that contentious politics in disputed areas are not primordial traits of those regions, but are a modern phenomenon tightly bound to the society and economics of urban life. Dr. Arbella Bet-Shlimon is a historian of the modern Middle East. She is an adjunct faculty member in the Department of Near Eastern Languages and Civilization at University of Washington and an affiliate of the Jackson School's Middle East Center. In research and teaching, she focuses on the politics, society and economy of twentieth-century Iraq and the broader Persian Gulf region, as well as Middle Eastern urban history. Her teaching has been recognized with several awards, including the UW's Distinguished Teaching Award. Her first book, City of Black Gold: Oil, Ethnicity, and the Making of Modern Kirkuk (Stanford University Press, 2019), explores how oil and urbanization made ethnicity into a political practice in Kirkuk, a multilingual city that was the original hub of Iraq's oil industry. Dr. Bet-Shlimon's research has been funded by, among others, the American Historical Association, the UW Royalty Research Fund, and the Institute of Historical Research, University of London. She has published articles in the Journal of Urban History and Comparative Studies of South Asia, Africa and the Middle East, and is on the board of the Academic Research Institute in Iraq.