Blackness in the Middle East 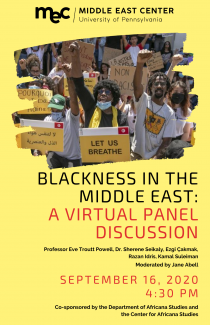 For those unable to attend, CLICK HERE FOR EVENT RECORDING

Professor Eve Troutt Powell is the Christopher H. Browne Distinguished Professor of History at the University of Pennsylvania. She teaches the history of the modern Middle East and the history of slavery in the Nile Valley and the Ottoman Empire. As a cultural historian, she emphasizes the exploration of literature and film in her courses. She is the author of A Different Shade of Colonialism: Egypt, Great Britain and the Mastery of the Sudan (University of California, 2003) and the co-editor, with John Hunwick, of The African Diaspora in the Mediterranean Lands of Islam (Princeton Series on the Middle East, Markus Wiener Press, 2002). Her most recent book is Tell This in My Memory: Stories of Enslavement in Egypt, Sudan and the Late Ottoman Empire (Stanford University Press, 2012.)

Dr. Sherene Seikaly is an Associate Professor of History at the University of California, Santa Barbara. She is a historian of capitalism, consumption, and development in the modern Middle East. The most enduring concern of her scholarly research has been to explore how individuals, groups, and governments deploy both concepts and material practices to shape economy, the body, the self, and the other. Her research on Palestinian businessmen; reformers of the domestic sphere; thinkers and scientists; and British colonial officers and institutions contributes to social, cultural, and intellectual history, political economy, cultural studies, and gender studies. Her new book project follows the trajectory of a peripatetic medical doctor to place Palestine in a global history of race, capital, slavery, and dispossession

Ezgi Çakmak is a fifth-year Ph.D. student and Benjamin Franklin Fellow of Africana Studies at the University of Pennsylvania; She is from Istanbul, Turkey. She received her BA from Bogazici University, Sociology Department. Her master thesis–from the same department and university–was an attempt to look closely into the encounters of African migrants in the city of Istanbul. Her research interests include the issue of African slavery in Anatolia in late Ottoman period and historicity of blackness in Turkey.

Razan Idris is a History Ph.D. student at the University of Pennsylvania. Her research focuses on blackness in Arabic-speaking contexts on the African continent and its diasporas abroad, through the lens of my broader interest in race and critical history. For her thesis, she currently plans to explore blackness as defined, experienced, and reacted to by male students at al-Azhar from the early Khedival period until today, using diverse legal texts, visual sources, and interviews. This is informed by her past studies, where she has investigated "Afro Arab" identity through gendered legal doctrines (namely al-kafa'a fil nasab.)

Jane Abell is a third year doctoral student in cultural anthropology at the University of Pennsylvania. Her research explores Islam in the United States, with a particular focus on how race and religion inform relations among Muslim groups. Dissertation fieldwork will be conducted in Philadelphia. Currently a Graduate Fellow for the Visual Anthropology section of American Anthropologist and an affiliated doctoral student with Penn's Institute for Urban Studies, Jane is also interested in visual representation, mass media, and urban spaces.