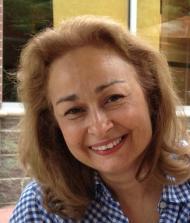 The Middle East Center would like to congratulate Dr. Feride Hatiboglu for being voted among the top five best professors at Penn!

In a ranking of the top 30 Penn professors, based on Penn Course Review data collected between 2009 and 2015, Dr. Hatiboglu scored a 3.94 out of 4.00 from student particpants.

Born in Ankara, Turkey Dr. Hatiboglu spent early part of her life in Istanbul where she earned a law degree from Istanbul University Faculty of Law. She then started working in the field of banking which was undergoing structural reforms in Turkey during the mid to late 1980s. Having moved to USA in mid 1990s she took some time off to complete Ph.D in Banking & Insurance from Marmara University in Istanbul. Subsequently she joined Penn at PLC to start a Turkish language teaching program, which in a few years became a successful multi-leveled language program with Elementary, Intermediate and Advanced programs under NELC. Most recently, 2 years ago an Ottoman Language course has been added under the Turkish Language program. Dr. Hatiboglu is dedicated to teaching a fast-paced language teaching program and has been instrumental in getting her students awarded with scholarships in Turkish language and culture programs with different Turkish and US institutions. She is an active member and Treasurer of American Association of Teachers of Turkic and member of Penn Language Center and American Research Institute in Turkey. She has full Oral Proficiency Interview and Writing Proficiency Test Certification for Turkish from American Council on the Teaching of Foreign Languages and an active consultant to American Councils in International Education in developing Turkish language testing programs.