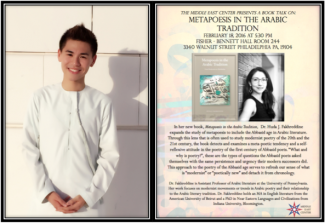 One of our goals at the Middle East Center is to increase understanding of cultures, histories and languages found in the Middle East and North Africa. We were so inspired and impressed by undergraduate Oscar Chim’s passion for Arabic that we wanted to share it with our community. We hope you find his story as fascinating as we do! We also included an interview with leading Arabic scholar and UPENN professor Dr. Huda Fakhreddine, so interested students can learn more about our incredible language team.

MEC: What sparked your interest to study Arabic?

Oscar: I was originally born and raised in Hong Kong, and grew up speaking English and Cantonese, while being exposed to Mandarin on a near-daily basis in Chinese classes at school. Therefore, when I began my French studies in the seventh grade, I was invigorated by the exoticism of learning a foreign language and was delighted at that time to have been at the top of my grade for my achievements in the subject for several years. Then, in preparation for Summer 2008, my mother, a true visionary who hoped to design a bright career outlook for me, was brainstorming hobbies that I could potentially take up given my linguistic talent, and suggested that I join a four-week Arabic immersion program held by the Middleburg-Monterey Language Academy in California.

Initially, I was intimidated by the language pledge, which forbade the usage of any language but formal Arabic, and the sheer presence of students of Arab descent and/or with prior experience in the language. One week into the summer camp, I started to enjoy the challenge of learning this unfamiliar language and, throughout the program, was fascinated by many aspects of the Arab region and was surprised to have had most of my misconceptions shattered through conversations with individuals with ties to the region, some of whom I still keep in touch with today.

After the program and prior to starting at Penn in 2013, I had almost no resources around me to cultivate my studies, and thus resorted to learning new words and expressions in both the formal and informal (mostly the colloquial Levantine dialect) registers by listening to all genres of Arabic Music, decoding and memorizing travel phrasebooks, attempting to read Al-Jazeera Arabic, and watching MBC programs online. At my boarding high school in Massachusetts, I led and involved myself with as many activities pertinent to the MENA region as possible, and bonded closely with those with similar interests. Most importantly, whenever I meet friends and acquaintances from the region, I always practice what I have picked up and learn more authentic expressions from them.

MEC: Could you please tell us a bit about your experience in the Modern Middle East Studies major?

Oscar: When applying for colleges, I was very determined to attain proficiency in the Arabic language and gain a better understanding of the Arab region. Thus, after some research, Penn's Modern Middle East Studies major seemed like the perfect fit for me, and I even visited the MEC and met with Dr. Darakcioglu when I was a prospective student in 2012.

All in all, I am very satisfied with my experience with the MMES major, as its guidelines and requirements have given me the epitome of an interdisciplinary education, the ideal in which Penn has always taken pride-- from my Arabic classes, to a lecture titled "War, Politics, and Everyday Life in the Modern Middle East" with Dr. Kashani-Sabet, and even to lectures on Islamic finance held by Professor McMillen in the Law School.

MEC: Do you plan to pursue a career related to your studies after you graduate?

Oscar: This past summer, I had the opportunity to intern at the Islamic Finance and Wholesale Banking divisions of the National Bank of Abu Dhabi, where I had the chance to speak Arabic on a daily basis and gained invaluable exposure to the work culture in the region-- from the more conservative Islamic environment to Westernized multinational settings. Looking down the road, it is my dream to continue to develop my career prospects in consulting and restaurant franchising in the Gulf region this summer and after I graduate in 2017.

MEC: Writing an entire seminar paper in Arabic for Prof. Fakhreddine’s poetry class is very impressive. Can you tell us about some of the rewarding and challenge aspects of this process?

Oscar: Given that I only started to solidify my fundamental Arabic vocabulary and grammar when I began at Penn in 2013, Prof. Fakhreddine's graduate poetry class was one of the biggest academic challenges in which I engaged during my undergraduate career. In the second class, we dealt with the prominent pre-Islamic poet and royal figure Imru' al-Qais's works in al-Mu'allaqat, a compilation of seven Arabic poems from the pre-Islamic era- at this point, I was intimidated by the unfamiliar vocabulary, rhyme schemes, and themes therein. As the semester progressed, I would spend around five to six hours on each set of the assigned poems and still not be able to complete all of them, as I am one to note down and try to digest every new word I had come across. And, although I struggled with the work, being exposed to Arabic poetry, a fundamental part of the Arabic literary heritage and contemporary culture, provided me with insights into many aspects of the lifestyles in what we perceive as the Middle East today that would not necessarily correspond with widespread cultural norms in the region today-- from heavy drinking habits to "heretic" viewpoints on Islam.

I ended the course by writing a seminar paper discussing manifestations of the theme of "renaissance" in one of the modern Iraqi poet Badr Shakr al-Sayyab's poems, and from the process genuinely sensed the intersection of and mutual correspondence between the types of revolutionary thought in Iraq and many Arab societies in the post-colonial era from the end of WWII into the late 1960's: literary/linguistic (with the introduction of free-verse against the backdrop of structured meters and structures of conventional Arabic poetry) as well as socio-economic and political dissent.

MEC: Do you have any tips or recommendations to your fellow students who would like to achieve high levels of proficiency in Arabic?

Oscar: Besides exposing myself to many varieties of Arabic media from for the past seven years, what has helped me the most in reaching proficiency in Arabic is my willingness to practice the language with natives, both in the US and in the Arab region. In fact, although I did not have the opportunity to be a part of a formal study-abroad program in the region, my biggest advancement in my Arabic speaking skills came from staying in Jordan for three weeks in the summer of 2014 as a part of the Penn International Impact Consulting program and interning at the National Bank of Abu Dhabi in the UAE for two months in the summer of 2015, during which I had the chance to be exposed to and absorb many Arabic dialects- from Levantine, to Emirati, to Egyptian, and to Tunisian all in one place. Learning through immersion and being light-heartedly willing to express my thoughts only in Arabic, albeit in occasionally awkward phrases amalgamating different accents and sentences lost in translation, is my most useful piece of advice to fellow students learning Arabic or any other foreign languages. In order to be proficient in a language, you have to feel like you were already born into it, so as to not give yourself any excuses to shy away from thinking in and practicing it. Oh, and I neglected to mention that I also have this compulsive habit of writing all new Arabic words and expressions in the "Notes" section of my phone!

MEC: Have you ever thought a course in Arabic before?

Dr. Fakhreddine: I have taught the seminar on Arabic Poetry twice at Penn so far in addition to a seminar on Early/Classical Arabic Prose which was offered last spring. Before joining Penn, I taught several senior seminars conducted entirely in Arabic on topics ranging from Modern Arabic poetry, the Arabic novel, the Arabic short story and drama and others.

MEC: What are some of the challenging and rewarding aspects of teaching a seminar in Arabic?

Dr. Fakhreddine: Teaching seminars in Arabic on Arabic literature is a very rewarding experience for me. It allows us as a group to address the linguistic intricacies of a text and engage with it in ways the are not possible in translation. This especially applies to poetry. I also think it is very important that these classes allow us to engage with works of literature and criticism that are not available in translation.

The main challenge of teaching a seminar in Arabic is providing the necessary  guidance for students to write academically and conduct research in Arabic. These seminars usually have a final research project. We work our way to it through short written responses and the exploration of possible resources and references.

MEC: Do you have any tips for students, especially for undergrads, who want to increase their Arabic proficiency?

Dr. Fakhreddine: I believe that taking content courses in Arabic should be the crowning experience of years of language study. Students are often apprehensive but its a necessary step to take if they are truly invested in learning the language. The training one gets from reading authentic texts, discussing them in class, and responding to them in writing not only hones linguistic skills but offers genuine insights into the culture.

The best way to increase Arabic proficiency is to keep reading and listening to Arabic on a daily basis. There are many ways to do that especially with all the resources available online. Merely reading news headline in Arabic everyday helps build vocabulary and reinforce grammar in a meaningful context.