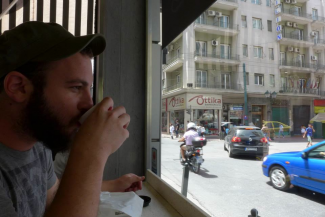 The 2016 Penn Middle East Center Translation Contest focused on the translation of contemporary Hebrew texts from the twentieth and twenty-first centuries. The translations had to be at least one full page and were judged on their accuracy, style and grammar.

This year, the Middle East Center is proud to announce Ariel Resnikoff as the winner of the Translation Contest. His translation of "Siftah" by Avoth Yeshurun was incredibly well done. Only a few of Yeshurun's have ever been accurately translated and, as a result, "Siftah" was an incredibly challenging poem to translate. Despite this challenge, Ariel's finished product was impressive and accurate.

Ariel Resnikoff is a poet, translator and editor. His most recent works include the chapbook, Between Shades (Materialist Press, 2014) and the collaborative pamphlet and Ten Four: Poems, Translations, Variations (OS Press, 2015), with Jerome Rothenberg. Ariel is an editor-at-large on Global Modernists on Modernism: An Anthology (forthcoming Bloomsbury, 2017) and curates the "Multilingual Poetics" reading/talk series at Kelly Writers House. In 2013 he received a Dorot Fellowship & spent a year in Israel/Palestine studying Hebrew, Yiddish, English, French and Arabic poetries. Ariel first came to the work of Avoth Yeshurun as a student of the Hebrew-American poet, Harold Schimmel and the Israeli poet, Yoram Verete. His translations from the Hebrew of Yeshurun, Schimmel, and Verete have appeared in various publications, including the poetry/poetics web-journal, Wave Composition & the Jewish Daily Forward. Ariel is currently reading for a PhD in Comparative Literature and Literary Theory at the University of Pennsylvania and lives with his wife, Rivka Weinstock, in the Cedar Park neighborhood of West Philadelphia.