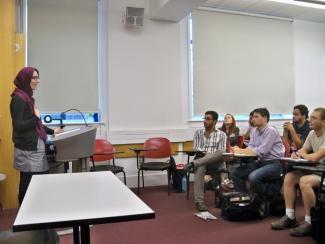 The Middle East Center acts as a hub for promoting the study of the Middle East across various departments and encourages interdisciplinary scholarly collaboration at Penn. To create a platform and bring graduate students whose research focuses on the Middle East together, the Center organized a graduate colloquium this year. Ten graduate students from departments of Anthropology, History, Near Eastern Languages & Civilizations, Political Science, Sociology, South Asia Studies, and Religion shared their research with their colleagues during the colloquium. Topics covered in colloquium ranged from Jewish doctors in medieval Islamic sources to hospitality industry in republican Turkey.

Beeta Baghoolizadeh, PhD Candidate in History, can be seen presenting her research on slavery on Pahlavi Iran in the picture during the colloquium.