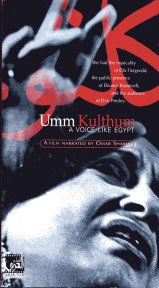 (67 mins) She had the musicality of Ella Fitzgerald, the public presence of Eleanor Roosevelt and the audience of Elvis Presley. Her name was Umm Kulthum, and she became a powerful symbol, first of the aspirations of her country, Egypt, and then of the entire Arab world. This spectacular film documents the life of the legendary Egyptian singer. Her career also reflects an important period in Egyptian history, the Nasser era. This film is important not only for music but Egyptian cultural and political history. Born a peasant at the turn of the century, Umm Kulthum became a woman of great wealth and power, confidant of presidents and kings and, above all, President Gamal Abd al-Nasser's unofficial ambassador in the region. Four million people were on the streets of Cairo for her funeral in 1975. To this day, her cassettes outsell every other Arabic female vocalist. Narrated by Omar Sharif, Umm Kulthum, A Voice Like Egypt is the first documentary to bring Umm Kulthum to an American audience. The film puts her life in the context of the epic story of 20th century Egypt as it shook off colonialism and confronted modernity. The camera explores her astonishing connection with her audience, taking us into her village in the Nile Delta, and into the cafes, markets and streets of Cairo where she lived and worked.

In English and Arabic with English subtitles.