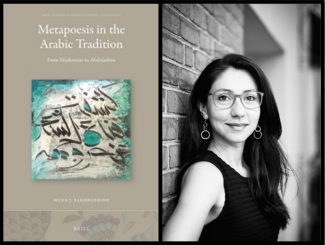 The Middle East Center would like to congratulate Huda J. Fakhreddine (Assistant Professor of Arabic Literature at the Department of Near Eastern Languages & Civilizations) on the publication of her new book, Metapoesis in the Arabic Tradition.

In Metapoesis in the Arabic Tradition, Fakhreddine expands the study of metapoesis to include the Abbasid age in Arabic literature. Through this lens that is often used to study modernist poetry of the 20th and the 21st century, this book detects and examines a meta-poetic tendency and a self-reflexive attitude in the poetry of the first century of Abbasid poets. What and why is poetry? Are questions the Abbasid poets asked themselves with the same persistence and urgency their modern successor did. This approach to the poetry of the Abbasid age serves to refresh our sense of what is “modernist” or “poetically new” and detach it from chronology.

Huda Fakhreddine is a specialist in Arabic literature. Her work focuses on modernist movements or trends in Arabic poetry and their relationship to the Arabic literary tradition. Fakhreddine has also explored Translation Studies, the politics of translation and its role in creating the image and status of Arabic literature in other languages. She holds an MA in English literature from the American University of Beirut and a PhD in Near Eastern Languages and Civilizations from Indiana University, Bloomington.