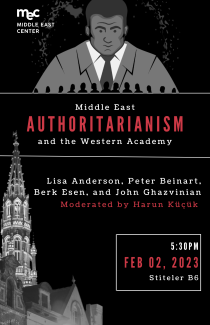 How do scholars navigate two different political landscapes? How do American liberal values interact with political views elsewhere? How does one’s citizenship or identity inflect one’s scholarship? What do we do as scholars when the places that we are studying are oppressive regimes? How do the core values that inform our scholarly work interact with our values as individuals? Finally, how do we maintain cultural openness at home without catering to tribalism elsewhere? These are questions that scholars of the Middle East struggle with, usually in silence and solitude, on a daily basis. Our panel invites reflection on these sensitive issues that deserve an open conversation.

Peter Beinart teaches national reporting and opinion writing at the Newmark J-School and political science at the CUNY Graduate Center. He is editor-at-large for Jewish Currents, a CNN political commentator, and a fellow at the Foundation for Middle East Peace. He is also a nonfiction author and former Rhodes Scholar. His first book, “The Good Fight,” was published by HarperCollins in 2006. His second book, “The Icarus Syndrome,” was published by HarperCollins in 2010. His third, “The Crisis of Zionism,” was published by Times Books in 2012. Beinart has written for The Atlantic, The Wall Street Journal, The New Republic, the Financial Times, the Boston Globe, Newsweek, Slate, The Forward, Reader’s Digest, Die Zeit, Frankfurter Allgemeine Zeitung, and Polity: the Journal of the Northeastern Political Science Studies Association. The Week magazine named him columnist of the year for 2004. In 2005, he gave the Theodore H. White lecture at Harvard’s Kennedy School of Government. He has appeared on “This Week with George Stephanopoulos,” “Charlie Rose,” “Meet the Press,” “The Colbert Report” and many other television programs.

Berk Esen is Assistant Professor of Political Science at the Faculty of Arts and Sciences, Sabancı University, Turkey. Before joining the department, he served as Assistant Professor and Vice Chair at the department of International Relations at Bilkent University. His research and teaching interests include the political economy of development, party politics and authoritarian regimes with a focus on Latin America and the Middle East. His research has been funded by the Science and Technology Institute of Turkey TUBITAK and published in top political science journals such as Party Politics, Journal of Democracy, Third World Quarterly, PS: Political Science & Politics, South East European Society and Politics, Journal of Near East and Balkan Studies, Mediterranean Politics, Turkish Studies, Review of Middle East Studies, and Middle East Review of International Affairs. Berk has received numerous prestigious awards, including the Sakıp Sabancı International Research Award for his work on democratic backsliding in Turkey and Hungary and the Turkish Science Academy Young Scientist Award (BAGEP).

John Ghazvinian is an author, historian and former journalist, specializing in the history of US-Iran relations. His most recent book, America and Iran: A History from 1720 to the Present (Knopf, 2021) -- a comprehensive survey of the bilateral relationship, based on years of archival research in both countries -- was named by the New York Times as one of "100 Notable Books of 2021". He is also author of Untapped: The Scramble for Africa's Oil (Harcourt, 2007), as well as coeditor of American and Muslim Worlds before 1900 (Bloomsbury, 2020). He has written for such publications as Newsweek, the Washington Post, the Los Angeles Times, The Nation, the Sunday Times and the Huffington Post, and has taught modern Middle East history at a number of colleges and universities in the Philadelphia area. He earned his doctorate in history at Oxford University, and was the recipient of a "Public Scholar" fellowship from the National Endowment for the Humanities in 2016-2017, as well as a fellowship from the Carnegie Corporation's special initiative on Islam in 2009-2010.

B. Harun Küçük received his BA in Liberal Arts from St. John's College and an MA in History at Sabancı University in Istanbul, Turkey. He completed his doctoral work on History and Science Studies at University of California, San Diego (2012). Prior to joining Penn's Department of History and Sociology of Science, he was a lecturer at Sabancı, Şehir and Boğaziçi Universities in Istanbul and held pre- and post-doctoral fellowships at the Max Planck Institute for the History of Science in Berlin. His first book, Science without Leisure: Practical Naturalism in Istanbul, 1660-1732 (Pittsburgh, 2019) is a history of vernacular science in the Ottoman Empire. The book investigates the cosmopolitanism, the republicanism and the intellectual self-reliance of Ottoman naturalists within the broader context of commerce, warfare, religious conversion and political upheaval in early modern Istanbul. Currently, he is writing a book about the long-term relationship between science and monetary capital. He is also part of the ERC-funded project “Geographies and Histories of the Ottoman Supernatural Tradition Exploring Magic, the Marvelous, and the Strange in Ottoman Mentalities.” Together with Oscar Aguirre-Mandujano, he is co-editing a primary source reader on Ottoman science. Küçük's research interests include science and religion, the Enlightenment and the movement of knowledge in the early modern period.