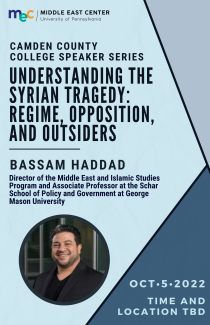 In 2018, seven years after the start of the uprising, Syria found itself divided and embattled, with no positive end in sight. More than half of the population had been displaced and the death toll had surpassed 400,000 by all counts. The Syrian tragedy persists and, more than any other case of mass uprising in the region, continues to be shrouded in political power-plays and contradictions at the local, regional and international levels. This talk is an attempt to understand the roots, dynamics and trajectory of the Syrian uprising, with particular attention to the local, regional and global factors that transformed the Syrian uprising into an all-out proxy war.

Bassam Haddad is Director of the Middle East and Islamic Studies Program and Associate Professor at the Schar School of Policy and Government at George Mason University. He is the author of Business Networks in Syria: The Political Economy of Authoritarian Resilience (Stanford University Press, 2011) and co-editor of the forthcoming book, A Critical Political Economy of the Middle East (Stanford University Press, 2021). Bassam serves as Founding Editor of the Arab Studies Journal and the Knowledge Production Project. He is co-producer/director of the award-winning documentary film, About Baghdad, and director of the series Arabs and Terrorism. Bassam is Co-Founder/Editor of Jadaliyya Ezine and Executive Director of the Arab Studies Institute. He serves on the Board of the Arab Council for the Social Sciences and is Executive Producer of Status Audio Magazine. Bassam is Co-Project Manager for the Salon Syria Project and Director of the Middle East Studies Pedagogy Initiative. He received MESA's Jere L. Bacharach Service Award in 2017 for his service to the profession. Currently, Bassam is working on his second Syria book titled Understanding The Syrian Tragedy: Regime, Opposition, Outsiders (forthcoming, Stanford University Press).