Non-State Actors and the Preservation of Threatened Heritage in Syria 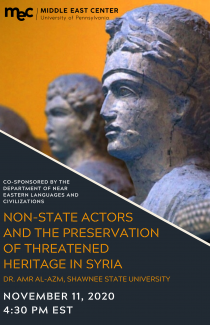 Join us for a talk with Dr. Amr Al-Azm, Professor of Middle East History and Anthropology at Shawnee State University in Ohio. Whilst working in Syria, Amr Al- Azm was a first hand observer and sometime participant of the reform processes instigated by Bashar Al-Assad, thus gaining insights into how they were enacted and why more often than not they failed. Furthermore, he is a keen follower and commentator on current events in Syria and the Middle East in general and has written articles in numerous journals, and major media outlets including guest editorials for the New York Times, Time Magazine and Foreign Policy.

Syria today is going through a traumatic and destabilizing conflict that has strained the ethnic, sectarian and social fabric of the country - almost all that makes Syria a single unified state - to beyond breaking point. Much of the country lies in ruins today, and its cultural heritage a casualty of the war from its earliest days through systematic looting and deliberate destruction.

The greatest burden to protect Syria’s cultural heritage during this conflict has fallen on local stakeholders and non-state actors. The majority of these non-state actors are centred on networks of local heritage professionals, civil society activists and NGO’s. These local networks often work under desperate conditions to protect museums and heritage sites, finding creative and simple solutions to overcome daunting challenges. They are also at the forefront in promoting awareness and strengthening local communities’ sense of ownership of their cultural heritage, in order to mobilize them against looters and trafficking in antiquities. Yet, because they are non- state actors, they are often denied any financial or technical support from international organisations and donors who traditionally deal only with member states and their institutions.

Given the appalling carnage and unprecedented levels of human suffering sweeping the country, there is the danger of an emerging binary that you either care about ancient stones, monuments and artefacts or you care about current humanitarian issues and the people affected. Despite that danger, heritage professionals and everyday people on both sides of the divide have rejected this binary by recognizing that culture and people are inextricably linked with a role to play in post conflict stabilization and reconciliation.