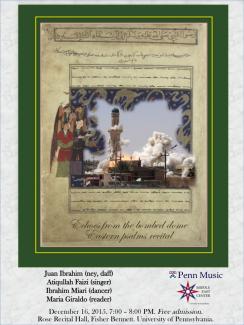 The recital is a claim against the systematic bombing, demolition and erasure of any place in this planet where hymnodies and psalms are sung.

The long legacy of these musical genres is associated with a conception whereby the voice and the sound are deeply immersed into what is called the didactic of the divine among the mystic traditions of Abrahamic faiths, cultivated in the Middle East and Central Asia. Psalms resounding in a dome, upon this perspective, have the practical function to open the horizon of human interiority towards something bigger than its dome, characterized by its own parietal in the top of its head.

The psalms we will interpret in Persian and Turkish languages were written by Jalaluddin Rumi and Yunus Emre in the 13th century, Anatolia. Echoes From the Bombed Dome's Recital is a sonic act of resilience in the name of the beauty and its vulnerability.